check out other pages

Adebola T Adeoti and Lilian Okeke educating the good people of Okene, Kogi state , North-Cental on the provisions of the I999 Constitution of the federal republic of Nigeria with regards to its condemnation of derogatory practices such as female genital mutilation, child marriage and child labour.

The Executive Director of LCI was invited by Hacey Health initiative as a Gender Development Consultant to facilitate a session on ‘Female Genital Mutilation/C Policies and Laws in Oyo state’ (Stop Cut Project) in a 3-day Capacity Building Workshop for stakeholders.⁣⁣⁣
⁣⁣⁣⁣
The ‘Stop cut’ program is funded by the United Nations Trust Fund To End Violence Against Women.⁣⁣ 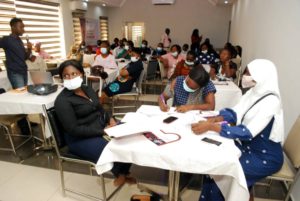 ⁣⁣⁣⁣
The first day has the presence of the Executive Secretary of Oyo State Primary Health Care Board, Oyo state Sexual and Reproductive Officer, Oyo state Coordinator of Sexual and Violence Based Team, and distinguished Civil servants from the Ministry of Health, Ministry of Justice, Ministry of Women Affairs, National Orientation Agency, and other government parastatals were ably represented.⁣⁣⁣⁣
⁣⁣
She educated the participants on international, national, laws, and policy frameworks on Female Genital Mutilation/Cutting, existing reporting procedures for FGM/C cases, and their roles in the enforcement of FGM/C Laws.⁣⁣⁣